Despite not having a stage performance, EXO took home yet another trophy on the May 1st episode of KBS Music Bank with “Call Me Baby.”

The group has been slaying music shows with an impressive record with this marking their 17th trophy for this comeback.

EXO took first place over EXID’s “Ah Yeah” with a score of 7746 to 5573 points. This win is also significant as the boys were able to take home the trophy without making a live stage performance. The episode of Music Bank was also made especially exciting as Jinusean invited all the performing artists to take the stage with them for “Tell Me One More Time” with Dara.

In response to this victory, EXO-Ls did it again, celebrating the trophy by trending “#CallMeBaby17thWin” Worldwide on Twitter.

The SM Entertainment group however is currently embroiled in controversy with an unclear status of member Tao following reports of his departure from EXO. 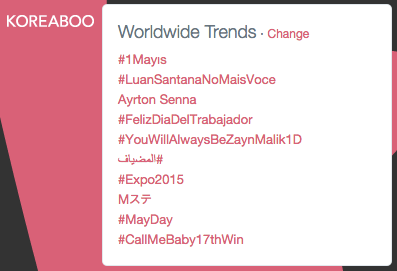