Although fansites are usually made for praising specific groups or idols, one fansite has come under fire for targeting an idol with a malicious tweet.

Recently, netizens on Pann pointed out that an administrator for one of AOA‘s Jimin‘s fansites sent a malicious tweet targeting Girls’ Generation‘s Taeyeon. The tweet claimed that the SM Entertainment singer’s nose has changed a lot, implying that she’s had plastic surgery. After seeing the tweet, many netizens criticized the fansite administrators, advising her to be more careful with her words when using a fansite’s Twitter rather than a private one. 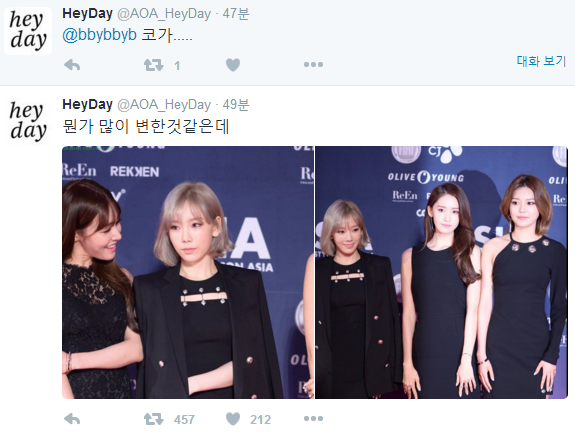 [+ 125, – 14] Did Taeyeon do something to Jimin? Why does she need to receive sudden unwarranted criticism on her face and why are Taeyeon fans being criticized with her. Jimin fans are so weird

[+ 119, – 11] She’s not a nobody on twitter that fan has name value so she needs to be careful ㅋㅋㅋㅋㅋ if she wanted to say such a thing she should have done it on an alternate account or a non official one.