Despite making their official comeback after a hiatus just last month with “Sticky Sticky“, Hello Venus recently announced that they would be having a surprise comeback in 2015 with a track titled “Wiggle Wiggle.”

Even though the six member group recently released a dance cover for a Jason Derulo track by the same name, Hello Venus’s upcoming track is entirely a whole new song. Hello Venus received a lot of mixed reactions regarding their dance cover, which has received over 2 million views since its release, but has since reinforced their new sexy concept by releasing a sexy pictorial with Geek magazine and a schoolgirl concept version of “Sticky Sticky.”

The teaser poster features the six girls in sexy Santa outfits and matching black stockings as they stand in front of a wall of golden ribbons. The teaser, on the other hand, features the girls in a dark room while dancing seductively to the sound of their new song. Although the teaser video is only 25 seconds long, it is clear that Hello Venus will be sticking to the sexy concept with “Wiggle Wiggle”; in fact, their new song’s choreography is so hot that it’s been rated 19+!

The release date for the track has yet to be revealed but the teaser video promises that it will be coming soon in 2015. Are you excited for Hello Venus’s surprise comeback? Make sure to check out the poster and teaser video below! 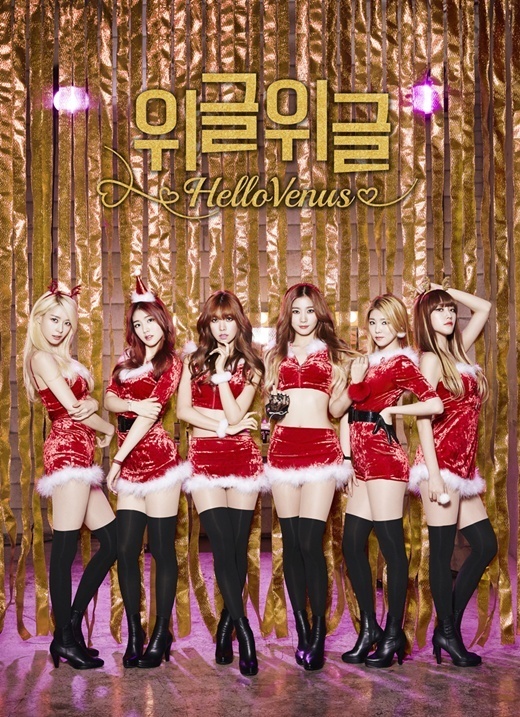