A remark from BIGBANG‘s Taeyang during the group’s “Artist of the Year” acceptance speech at the 2015 MAMA has gained a lot of attention, prompting netizens to berate idols who left the show early.

The 2015 MAMA took place on December 2nd in Hong Kong at the Asia World Expo with the Red Carpet event taking place between 6pm and 8pm KST and the main event and ceremony scheduled to take place at 8pm KST until midnight KST.

With the final award, “Artist of the Year,” being the final award given out, BIGBANG was announced to have won this prestigious award and went up to accept their award. However, those watching the ceremony have noticed that very few artists remained with the majority of them having left the awards early.

Taeyang said, “I think it maybe hard for Big Bang to show up as a complete unit at MAMA for a long time. We were happy to be able to show such amazing stages at MAMA until now. It was an honor to be able to be a part of MAMA and perform what we wanted on stage. We are thankful to receive so muany amazing awards. One thing that I wish could have been different is the fact that I wish it could have been a festival to the end but many artists are now absent. We will come back to all of you with awesome songs and performances.” 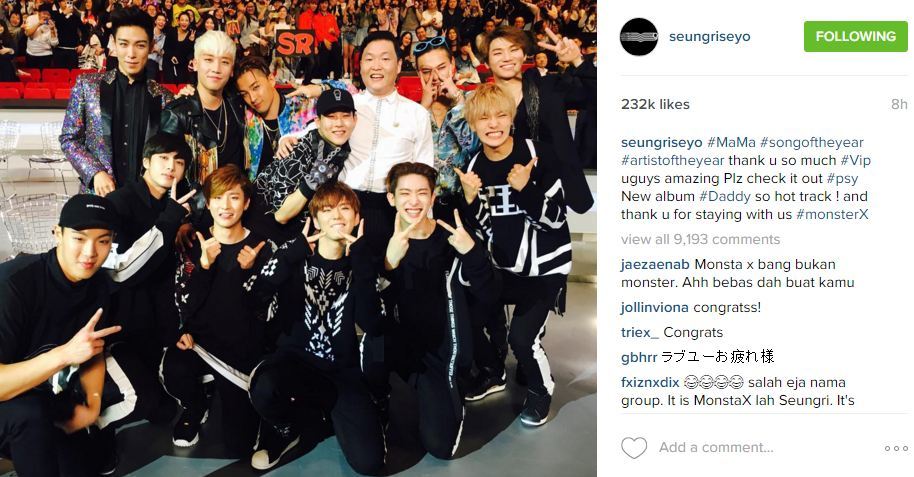 His comment pointing out that not many celebrities had remained until the end of the show with MONSTA X the only idols left at their seats has brought about much criticism from netizens who agreed with Taeyang and commented that it was extremely rude for said idols to have left early with much of these geared towards SM Entertainment artists.

However, as some pointed out, the majority of the artists, including iKON, who had left the ceremony early had either been backstage for an interview with Mnet (EXO) or had to catch a flight back to South Korea (or to Prague in the case of SHINee and Red Velvet for the Czech Hallyu Wave Concert) to carry out their other schedules.

From TV Report via Naver:

[+481, -27] I can understand why Big Bang is such a long lasting group…When they went up to get their award….all the chairs around them were empty….I was watching it live and I was so surprised, but Big Bang stayed till the end applauding and bowing to everyone…They have every right to say such things. They have at least 5 years over everyone else too.

[+409, -22] Big Bang and even PSY was there and people were so rude to leave before them. Monsta X and Chow Yun Fat were so nice to stay. Monsta X fighting!

[+333, -19] There’s a reason groups stay popular for a long time. How could everyone else leave as soon as their turn is over…

From Newsen via Nate:

[+372, -61] Pfft there were so many artists who didn’t do anything but applaud for 4 hours. Blame MAMA for delaying things for over an hour.