In a recently uploaded video clip, Red Velvet members Wendy and Irene were seen having an unique interaction on stage.

Wendy appears to be leaning in and playfully hitting on Irene with her arm around her shoulder. Immediately Irene is annoyed and tries to brush Wendy off, until she suddenly decides to turn to tables, and starts mirroring Wendy instead. Wendy can’t help but feel equally annoyed and they both start laughing gaily. At first fans were confused to see Irene reacting so negatively to Wendy, but in the end it looks like the two were just teasing each other and having fun. The clip is short, but shows just how close the friendship is between the members of Red Velvet. Take a look for yourself! 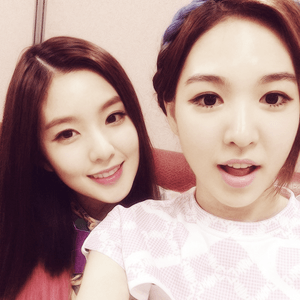