BIGBANG’s T.O.P remains to be one of the most talked about Korean celebrity Instagram as he reaches his first million milestone.

On April 29th, ten days since joining the social networking site, Instagram, T.O.P gained an impressive following as he reached his first million milestone for his177 posts and counting. It comes to no surprise as he has delighted fans with his updates, constantly sharing photos of his favourite art pieces, pictorials, selfies and more.

Aside from his updates, his replies and comments from other BIGBANG members were also a hit amongst fans showing how much of a boss he is on his own account.

Meanwhile, he also recently shared a sad post as he asked fans to pray for his dog, Charlie, who was diagnosed with brain tumour.

T.O.P joins the rest of the group as they prepare for their first set of releases “Loser” and “Bae Bae” on May 1st. 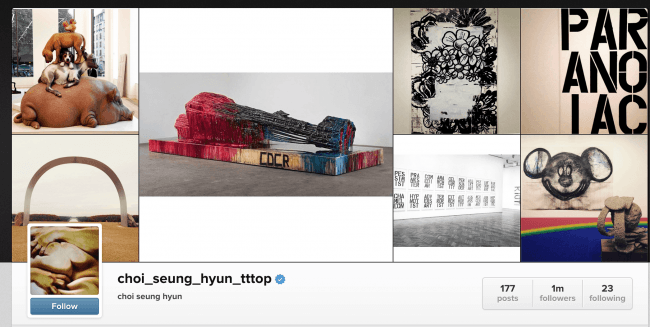