On the April 5th episode of SBS Inkigayo, EXO took home their first trophy for their comeback track “Call Me Baby,” winning over Red Velvet and Huh Gak.

After performing both “Exodus” and “Call Me Baby” from their latest album EXODUS, the group won with an overwhelming 10,000 points against the 5,148 points for Huh Gak and 5,215 points for Red Velvet.

This win marks EXO’s first as a group of 10 members, making it a very special one. Suho took to the mike to give an emotional, excited thank you, giving a special shoutout to their member Tao who was absent due to his injury before Lay took over and said his thanks in Chinese.

Fans celebrated EXO’s win with #CallMeBaby1stWin, bringing the trend to #1 worldwide on Twitter.

In addition, ZE:A’s Kwanghee gave his thanks as he bid farewell as he will be stepping down from his position as an MC on Inkigayo after two years and four months.

Congratulations to EXO on their first win for “Call Me Baby!” 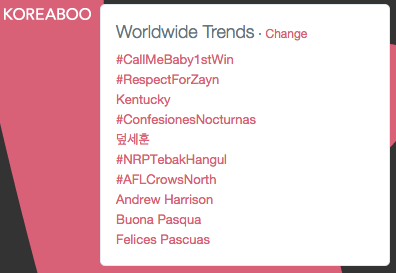