After MBC‘s Show Champion announced EXO as the winner for April 8th’s episode, EXO-L showcased their support for the group as they trended #callmebaby2ndwin on Twitter worldwide.

Although EXO did not perform, they won with the title track “Call Me Baby” which was released on March 30th. EXO shared their gratitude and excitement for the trophy through a short clip which was revealed at the end of the episode.

“Call Me Baby” is the perfect song as it showcases EXO’s charming choreography and vocals. In addition to releasing the music video for “Call Me Baby” in both Korean and Chinese, EXO released their 2nd album EXODUS on March 30th.

Meanwhile, EXO won their first trophy on April 5th’s episode of SBS Inkigayo, where they performed “Exodus” and “Call Me Baby.” EXO won with an lead of 10,000 points against the 5,148 points for Huh Gak and 5,215 points for Red Velvet. 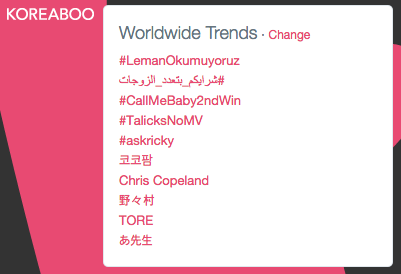