On December 8th, the tag #JHopeYourePerfect trended in Korea once again after the idol used the tag in one of his Twitter updates.

After receiving negative feedback from fans for his appearance with the tag #KickOutJHOPEbts, fans stepped up for their idol, J-Hope of BTS #JHopeYourePerfect in order to cheer him up.

Since the occurrence on November 29th, the hash tag resurfaced once again as J-Hope used #JHopeYourePerfect in one of his recent tweets. After BTS held their concert in Manila, J-Hope left a message on his Twitter saying,“Manila, jjang! Please say that I’m coooooool!” Not long after, the tag quickly became popular again, holding #2 in Korean trends. 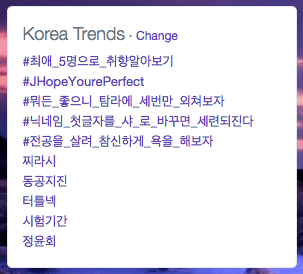