For girlfriend’s birthday and mother’s day, a Korean boyfriend spent three weeks preparing a gift for his girlfriend and her mother.

Korean boyfriends are notorious for having surprise romantic events and making hand-made gifts for their girlfriends. We all know that Korean couples do not just celebrate birthdays and holidays like Christmas, Valentines and Pepero Day (November 11th), but even numerical anniversaries starting from the 100th day anniversary and so on.

Originally posted by the Korean boyfriend himself, he explains the reasons and steps of making the gifts for his girlfriend and her mother.

Titled: “Surprise gift for my girlfriend that I prepared for 3 weeks!”

Here is the direct translation coming from the Korean boyfriend himself:

I’m a 26 year old male that is having a great and beautiful relationship for the last six months with a pretty and lovable girlfriend.

My girlfriend is 20 and since we’ll be celebrating her first birthday together, I started to personally make roses for her starting this summer break to fill her birthday with a special and meaningful present haha.

We were actually together on Coming-Of-Age Day but I didn’t know you were supposed to celebrate it when you were turning 21 so I didn’t get the chance to get anything for her. This is the reason why I started to make a meaningful present by making the roses with my own hands.

My goal was to make 50 roses! And also since my girlfriend’s birthday is on Mother’s Day, I decided to prepare a gift for her mother as a thank you giving birth to my beautiful girlfriend haha.

Since summer break, I have been meeting with my girlfriend everyday so I tried to make them with whatever free time I had.

The last ten days, I spent all-nighters after coming home from dates with her haha.

I’ll show you the pictures!” 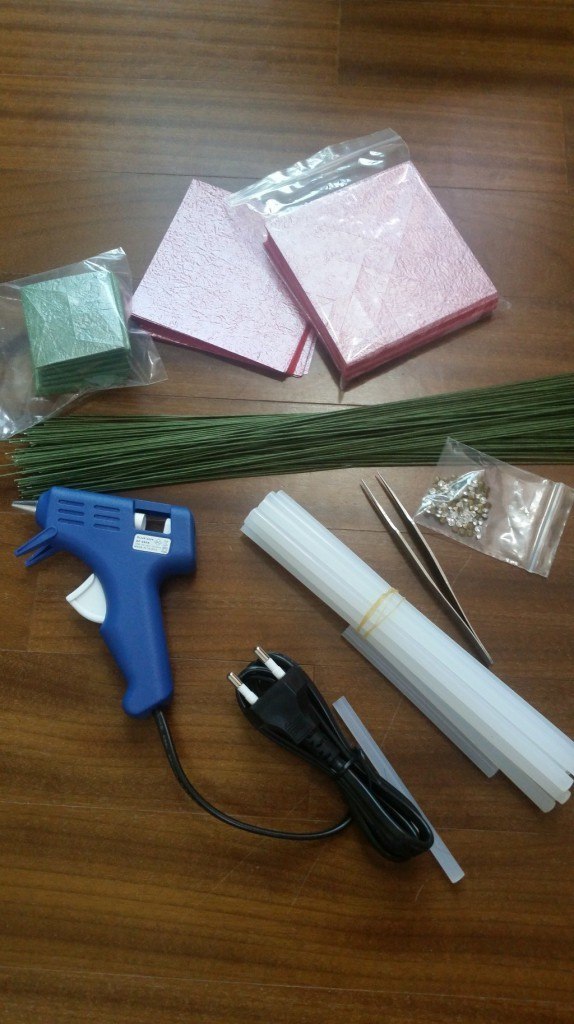 “My girlfriend’s birthday is July 12th but after purchasing materials, I started making it from May 27th right after break started” 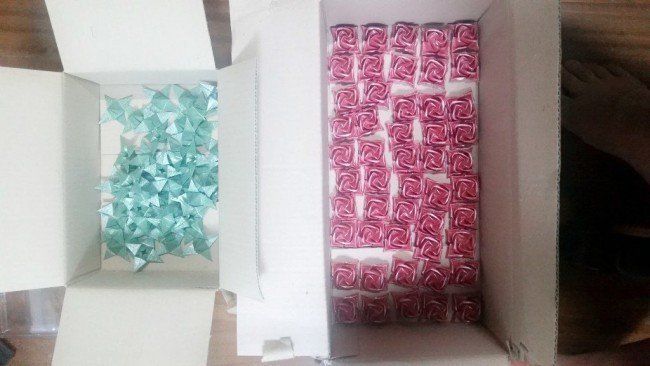 “Because I was never good at origami, it took me two hours to make one at first 🙁 After getting used to it, I started making each one in 30 to 40 minutes. The rose leaves took about 5 to 10 minutes. Same with gluing the metal and the cubes. I think it took an average of an hour to complete one rose set.” 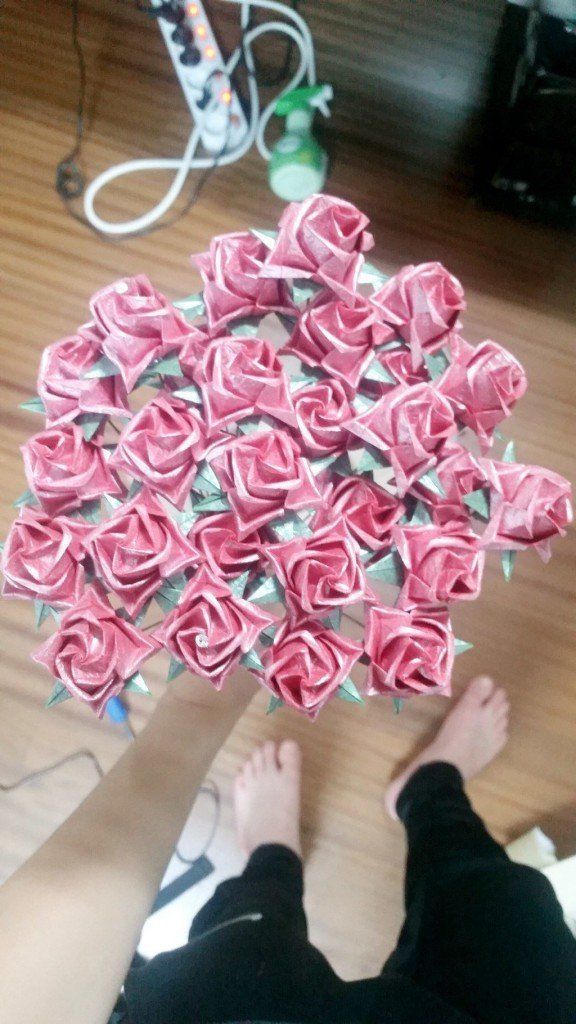 “Mid-way check up! I wasn’t going to add the cubes at first but all of my friends said it was prettier with the cubes so I decided to add them as well haha” 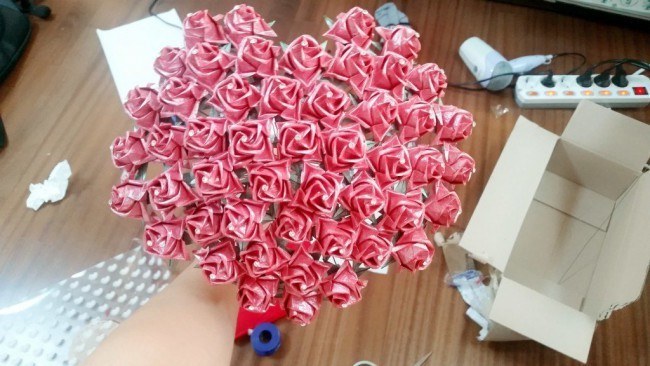 “After completing 50 roses, I organized them in a heart shape before taping them together.” 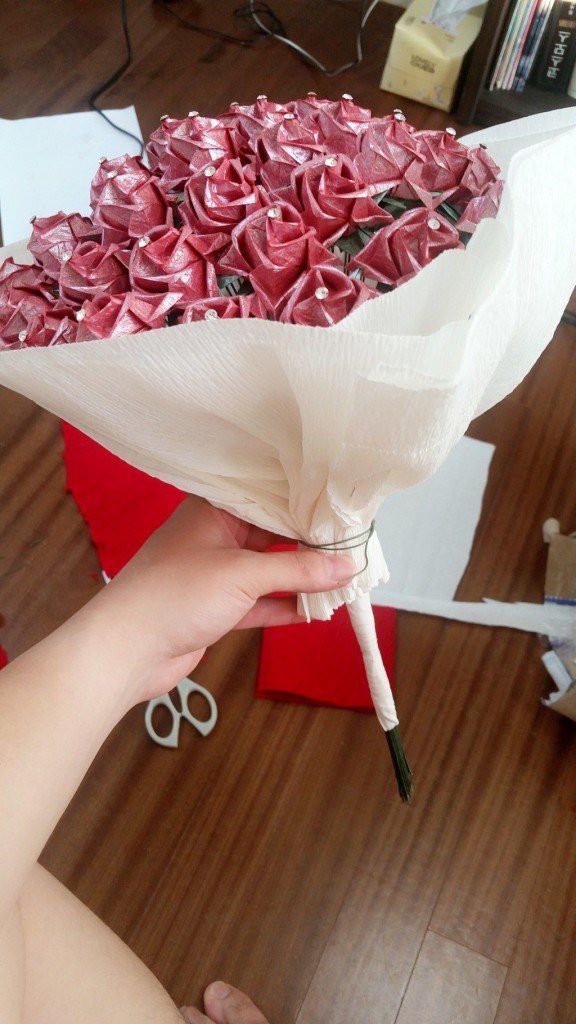 “Packaging is the next step!

I purchased about 10 different packaging wraps and tried them all on haha Personally, this was the hardest part for me than making the roses themselves…” 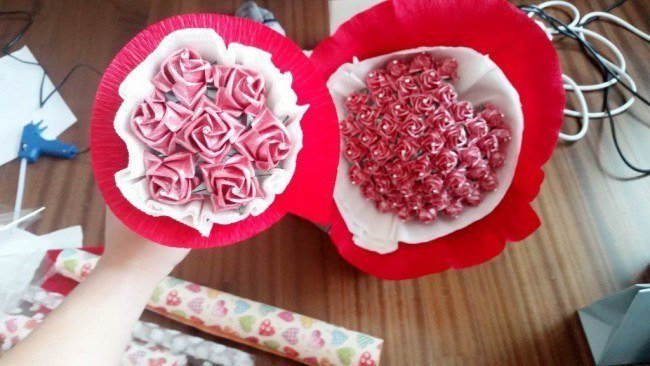 Even the 50 roses look really pretty, like morning glory flowers but since I took the photos from above, they don’t look as pretty as they do in real life.” 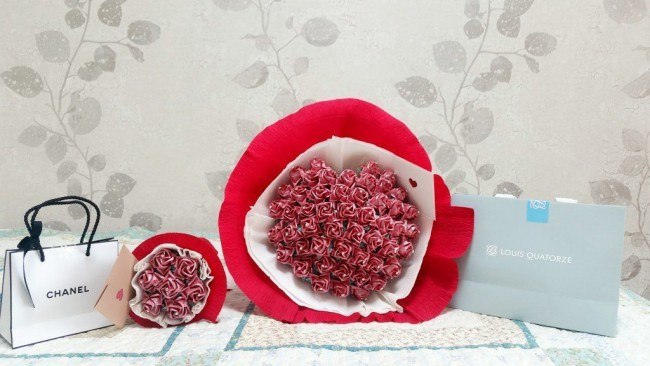 “Lastly, I took a picture with hand-written letters and put them next to other gifts I prepared!

There is a story to this: After wrapping the 50 flowers together, I noticed there was one flower lying around the floor hahahaha ha….. When I counted them, there were 49 wrapped together so I had to take the tape out and start from the beginning 🙁 I really felt like crying…

On her birthday, we had a beautiful date and also ate something good ^^

If many people watch this post, I’ll also put up our couple photo as well!

A lot of people saw this post and left many comments.

Like you all have said, I thought of my mother when I started all this.. I kind of felt bad too..

I’ve always bought her gifts but never made one myself. So when I was preparing my girlfriend’s gift, I ordered materials for 100 more roses and I have started making them after my girlfriend’s birthday haha.

I think it’ll be finished before my break ends!

And there were people who thought it was childish to do such a thing at my age 26, but it is my first time doing such a thing haha I’ve only done paper air planes during childhood..

That is how special my girlfriend is to me so I wanted to give her something meaningful.

I could buy anyone a present easily with money.

I even frequently buy her real flowers!

I think I’ll have to ask my girlfriend’s permission for the couple photo though ^^;

After speaking with my girlfriend, I don’t think I should be posting the photo haha

I didn’t know this many people would watch this post but thank you so much!

p.s. To my girlfriend Jee In who is studying hard in Singapore~ <3 Please visit beautiful places and eat yummy food for the last 10 days you have left there and be safe haha.

Oppa is always thankful and loves you <3″

[ +128 / -261] I think this is personal preferences haha but I personally don’t like it,,, When my boyfriend makes those for me,, there is no emotion for me,, I don’t like to act emotional,, when I was in my teens I would have liked it but in my 20’s, I can’t throw them away and they’ll just be gaining dust~ and just be there~~ –;;; but if both of them likes this type of things, I think it’ll be memorable~~~