Netizens discuss the past mystery on whether BIGBANG Seungri drank or not prior to his car accident.

Earlier we reported that YG Entertainment lost their lawsuit against reporter identified as “K” for libel and defamation through reports against YG and BIGBANG member Seungri. However, netizens have started to find out irregularities in the incident of Seungri’s car accident.

Originally posted on Pann, netizens discuss the past incident of BIG BANG Seungri’s car accident and the mystery behind on whether he drank or not prior to his accident.

Titled “The Truth of Seungri Who Caused The Car Accident,” here is the direct translation of the post and comments below.

libel against YG Entertainment and there are some irregularities in the article. 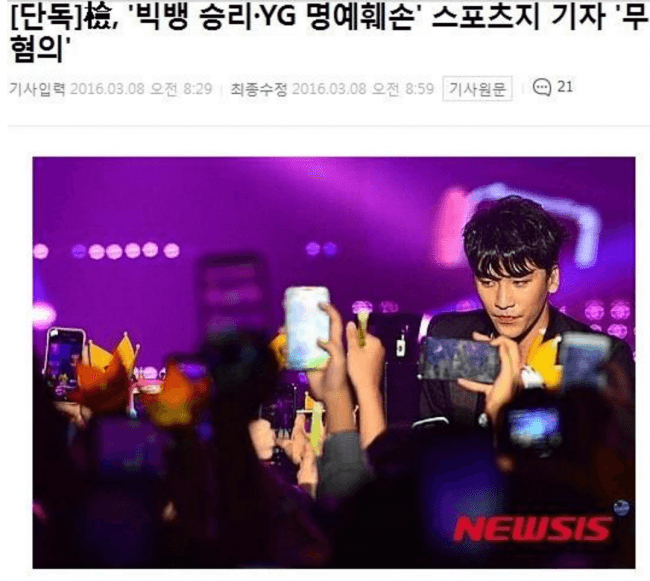 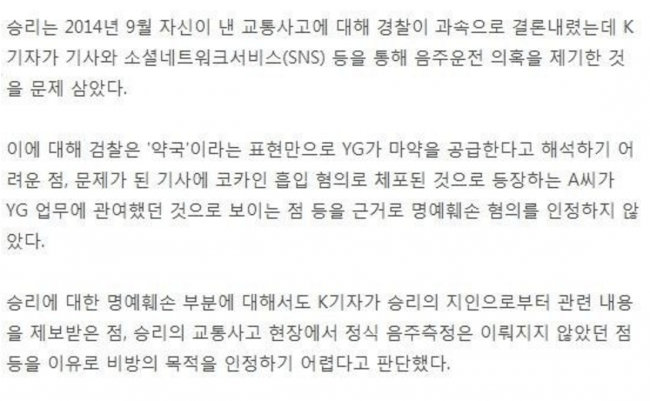 “Seungri followed his lawsuit against the reporter “K” after the reporter brought up speculations of Seungri drinking prior to his accident on September of 2014 through reports and SNS.

Regarding the libel charges, the district attorney disagreed on the lawsuit for these reasons: It is hard to see that the use of ‘pharmacy’ references back to YG producing drugs. Looking at the fact that male “A” worked in YG Entertainment prior to his arrest for cocaine use.

Also the defamation charges against the reporter were dropped after the reporter attained information that Seungri was drinking from his friends and the fact that Seungri wasn’t checked for driving under the influence of alcohol at the scene of the accident. Due to these reasons, they decided that it is hard to charge the reporter for making up lies for the purpose of defamation.”

But if you look at the article that was posted in September of 2014, the police answered to Seungri’s possibility of driving under the influence of alcohol by stating:

‘We checked at him the scene. Nothing came out. The speed of his vehicle was the problem. He admitted to his fault and that insurance will perfectly take care of it.’

But today’s article, the courts themselves explained that reporter ‘K’ attained information from Seungri’s friends that he was drinking prior to the accident and that Seungri wasn’t checked for driving under the influence which were the reasons why all the charges were dropped for the reporter.

So they are saying that the police department lied to the public right?

[ +80 / -7] At the time of the accident, there were witnesses that claimed they saw BIGBANG Seungri drinking before the accident. It was also revealed that he wasn’t checked for driving under the influence of alcohol and that he left by getting off the ambulance on the way to the hospital.

[ +37 / -1] This still remains a mystery that makes me wonder. He comes out normally for BIGBANG after doing a one night stand with a girl and even speeding and causing a car accident.

[ +37 / 0] Hey VIP cockroaches, stop pressing the dislike button and try to protect your artist. They trying to use vote tricks.

[ +34 / -8] I guess they can be called a pharmacy now right? hahahaahahaha Even the courts ruled that libel and defamation cannot be charged