After hearing news that actor Lee Kwang Soo was in talks for joining the cast an upcoming web drama, netizens have started expressing their excitement.

According to Korean media outlets, the Running Man cast member is in discussions for the lead role in the web drama adaptation of popular webtoon The Sound of Your Heart. Many netizens have noted that the actor really matches well with the role and are wishing that his casting will be confirmed soon. 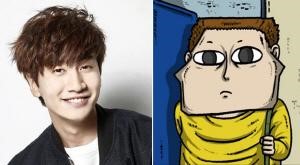