Recently, a blog post was made capturing the attention of Korean online users. The post was made by a fan of Mnet‘s hip-hop reality program, Show Me The Money 4, and alleged that many of the rappers on the show had a history of writing sexist and misogynistic lyrics.

Originally posted as a blog post titled “I really f**king hate hip-hop insects,” many fans and netizens are outraged at some of the past vulgar and sexist lyrics by SMTM4 contestants. With WINNER’s Song Mino being criticized for his lyrics that crossed the line, SMTM4 contestants are put in the spotlight again as their past lyrics have been released to the public.

Here are translations of the lyrics and the blog post: 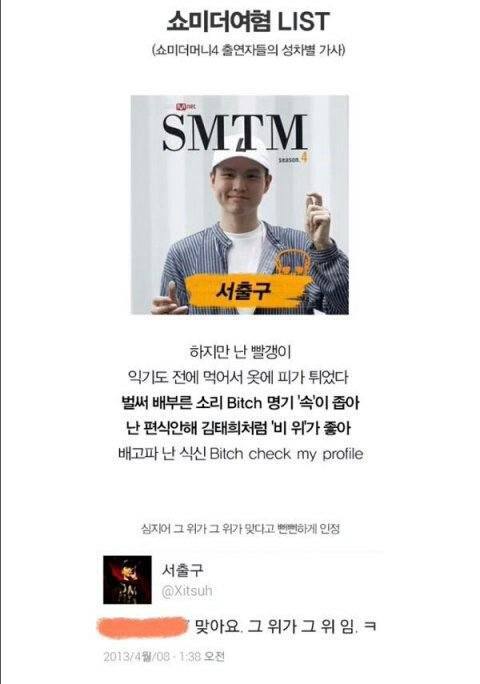 “You’re already sounding like you’re full of it Bitch
your interior is narrow.”
(Word play with being narrow-minded)

“I’m not a picky eater, I like it when “Rain is coming” like Kim Taehee.”
(Reference of singer and actor Rain and his girlfriend and actress Kim Taehee. It can also mean Rain on top in a sexual reference)

He also posted via Twitter back in 2013 that his sexual reference is indeed correct, stating: 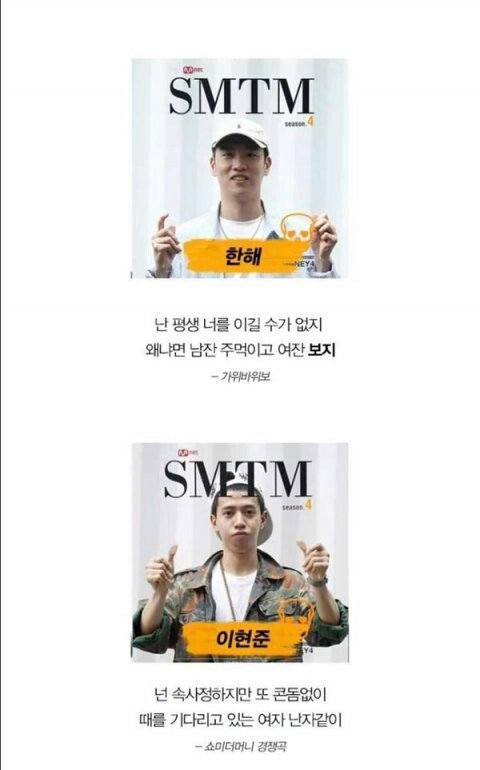 “I can never beat you all my life. You know why? Because men are always rock and women are always scissors.”
(Word play with Korean word for scissors. It is a slang for a woman’s sexual organs)

From his song “Rock Paper Scissors” 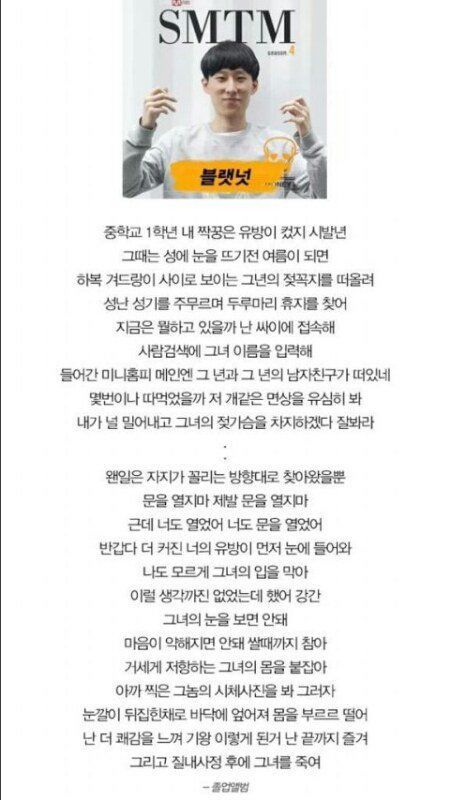 “my deskmate in first year of middle school had big tits that bitch
that was before I opened my eyes to sex, when summer comes
I remember her nipples I could see through the summer uniform sleeves
rubbing my hard penis I look for the toilet paper
wonder what she’s doing now, I go on cyworld
in the search bar I enter her name
on the main page of her mini it’s the bitch and her boyfriend
wonder how many times he’s had her, I look closely at his ass-like face
fucker looks giddy as fuckthe motherfucker has such sly eyes
watch me, I’m gonna push you and claim her tits

what’s up? just here because my dick told me to
don’t open the door please don’t open the door
but you opened it you also opened the door, good to see you, I see your tits first, they’ve become bigger
I cover her mouth before thinking
I wasn’t planning on this but I did it, I raped her
I can’t look at her eyes
I can’t become weak, I hold back until I come
I hold her body trying to resist me
she sees the pictures of the corpse I took earlier and
her eyes roll back and she falls to the ground shaking
I feel more pleasure, I’ve come this far, so I enjoy it until the end
I come inside her and I kill her” 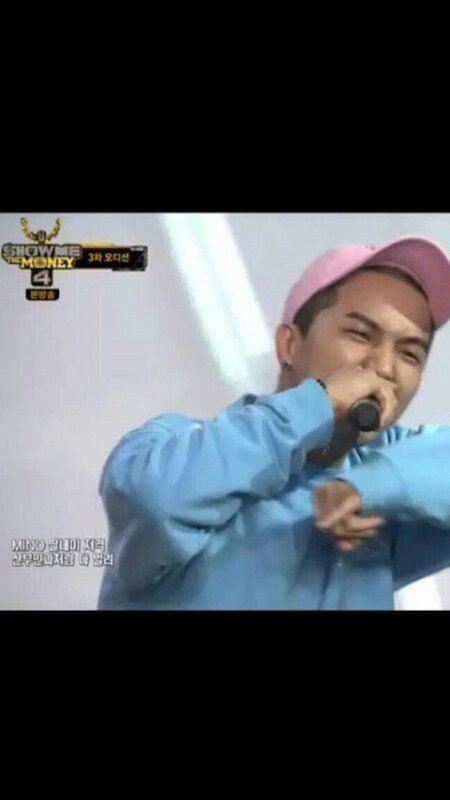 “Mino sniping the girls. Spread your legs like you’re at the gynecologist.”

[+15, -0]  I’m a man myself but what did women do to deserve these insults? Including so many words like bitch and p*ssy. Always talking about their horniness and sexuality. I bet these psychopaths are laughing at themselves making these lyrics thinking they’re smart asses.