The problem occurred when BIGBANG’s “Bang Bang Bang” was released at 12:00AM on June 2nd KST, but was delayed on being registered in the voting system for 41 hours.

Numerous fans began voting on BIGBANG’s track “Bae Bae”, which was the only registered track during this delay. Due to the 1 person 1 vote system that Inkigayo has in place, fans were then unable to vote for “Bang Bang Bang”, splitting the votes.

Comments appeared as below: 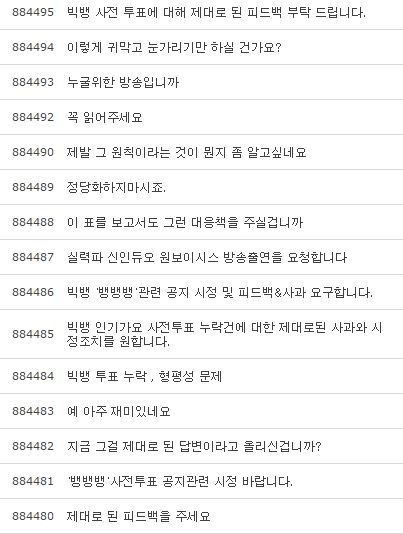 884495: Please give proper feedback with regards to Big Bang’s voting
884494: Are you going to keep pretending you’re mute and deaf?
884493: Who is this broadcast for
884492: Please read
884490: I would like to know what that policy really means
884489: Stop trying to justify yourselves
884488: Let’s see if you can justify yourself after seeing this chart
884487: I request the appearance of skilled rookie duo One Voices
884485: Requesting a formal apology and damage control of Big Bang’s absence from the voting candidates
884484: Negligence towards Big Bang, and its unfairness
884482: Yes very fascinating
884481: Are you serious with that response
884480: Please provide us with a proper feedback

‘Inkigayo’ responded through the forum stating, “Every Wednesday afternoon the candidates are determined based on ‘new songs released from Monday~Wednesday of the week’ and ‘New songs from appearing singers’. This means that if an artist is already a candidate on Monday but releases another song, the song of the artist is replaced with the new song during the process of voting.

In the case of BIGBANG’s ‘Bang Bang Bang’, due to its release on Monday June 1st, according to proper procedure, their song ‘Bae Bae’ was replaced with ‘Bang Bang Bang’ on Wednesday June 3rd in the afternoon. This did not go against our normal policy.”

Fans are however still not satisfied, stating they would have held their votes and waited for the registration of ‘Bang Bang Bang’ on the charts had they known this policy.

They also claim that the treatment is different from other incidents,  where on the 8th, ‘Inkigayo’ failed to register EXO’s new song on the charts and apologized to fans. They also allowed fans to re-vote via their email.