Although idols should expect to deal with negative comments from cruel netizens rather frequently, feelings can still be hurt from malicious words.

In a recent broadcast for the livestream app V, SM Entertainment girl group Red Velvet read through fan comments, with one particular malicious comment geared toward maknae Yeri appearing to ruin the mood of the young singer.

The comment in question read, “”Yeri stop acting out before I stick a knife in your p***y.” After the comment appeared on the screen, Yeri’s face instantly changed and many fans noticed that she appeared as if she was holding back tears. Yeri is the newest member of Red Velvet after being added to the group just before the group’s release of their last album Ice Cream Cake. The group is currently promoting for their first full album, The Red.

Fans stood up to defend Yeri and bring attention to the anti-fan. One particular fan wrote:

When the comment came up “Yeri you whore stop acting out before I stick a knife in your p***y” Yeri probably saw the comment but didn’t show it. But when other members were talking her face hardened, and when they were doing choreography it sounded like she was holding back tears. Later when they played songs she looked like she was just faking a smile. I don’t think the other members saw the comment but I think Yeri did. Whoever did this, if you are a person think again before you post shit like this again. I’m considering giving this over to SM for them to take action. She’s a first year high school girl before she is a celebrity. Remember that you, crazy bastard. 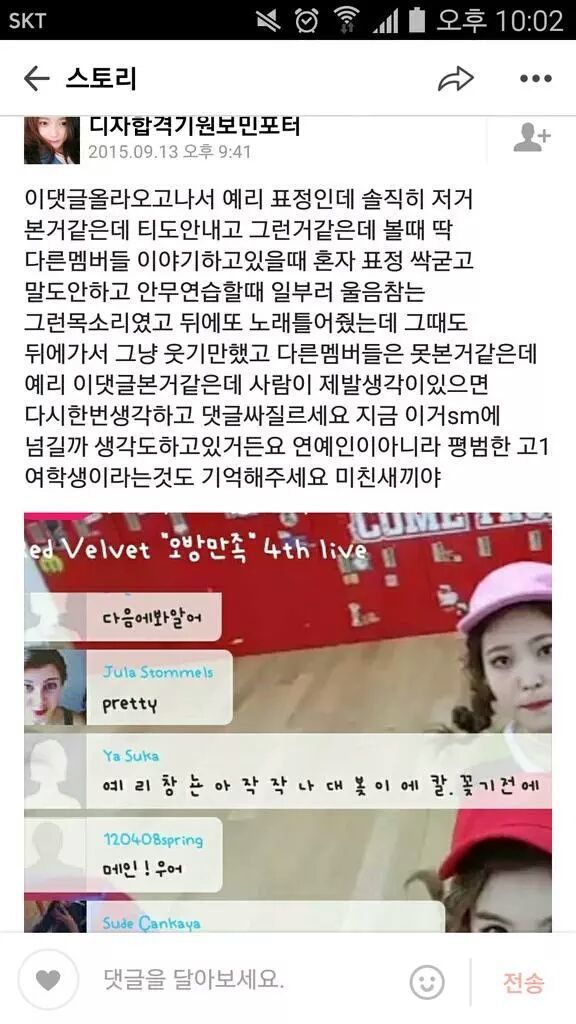 Although the netizen believed that the other members of the group didn’t notice the malicious comment, others suggested that Wendy also saw the comment, as she appeared to become upset around the same time as the comment showed up onscreen.
Check out the clip below to see what happened.