We Want To Know The Truth, the hour-long documentary program that has been following Lee Jung Hee was released yesterday, revealing insightful video footage into the Lee Jung Hee controversy.

For our international readers and followers of the Lee Jung Hee case, we have summarized notes from the program, We Want To Know The Truth.

Before we begin, the program We Want To Know The Truth is known for their unbiased approach while investigating issues, whether it be government-related or involving ordinary citizens. The program has been airing since 1992 to help people or inform people of current events.

The producers blur faces of alleged victims and suspects for their privacy. The only case they do not blur the face or distort their voice is if they get direct permission.

Here is a summary of the points:

2) Lee Jung Hee claimed that her ex-husband is a rich and powerful pastor controlling police and media.

3) Ex-husband (Mr. Huh) was found in Busan delivering pizza after leaving his father’s church eight years ago. He did not even know about such allegations until producers of the show reached him.

4) Until 2014, Lee Jung Hee only claimed she was beaten by her husband to grant a divorce.

5) A surprise raid was performed on Mr. Huh’s properties to find the alleged videos but nothing was found.

6) Lee Jung Hee disappeared for eight months after her press conference only to reappear on the internet post that went viral.

7) Lee Jung Hee is found doing something suspicious with her son. Who is shaman Kim?

8) After Lee Jung Hee started to get close with shaman Kim, the family started falling apart.

9) Most people agree, Lee Jung Hee and her two sons were acting suspiciously when they thought the camera was off.

10) Lee Jung Hee laughed while her son was explaining his alleged rape.

11) Psychologists claim there is a high chance that they all may be making up a lie.

12) Professionals agree that they are telling the truth about about battery and assault but not the rape and other allegations.

See below for a detailed explanation of these bullet points. 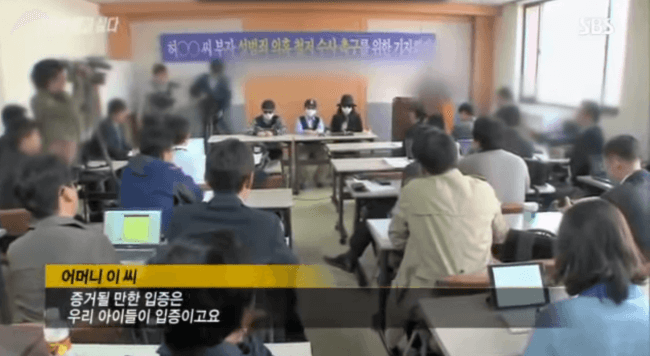 1. Lee Jung Hee held a press conference with her two sons on October 29th, 2014. She claimed that her ex-husband, ex-husband’s family members, her own family members and in total more than 300 people allegedly drugged and raped her and her two sons for more than ten years. Currently, she has sued over 30 people with various charges including rape, prostitution and forced drug usage.

When asked by the media if she has any solid proof or evidence that support her claims, she said the only evidence she has is her two sons, their experiences and her own 20 years of experience. 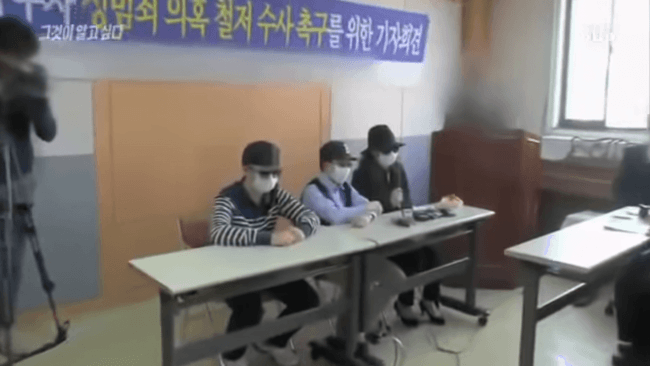 2. Lee Jung Hee claims that her ex-husband and the people involved are rich and powerful, controlling the media and even the police. Lee Jung Hee and her two sons disappeared for eight months after the press conference and refused to meet with any media or police until making a reappearance in June of 2015.

However, her ex-husband (Mr. Huh) who is being accused of alleged rape, drugs, and prostitution charges met with the producers of We Want To Know The Truth in March of 2015. 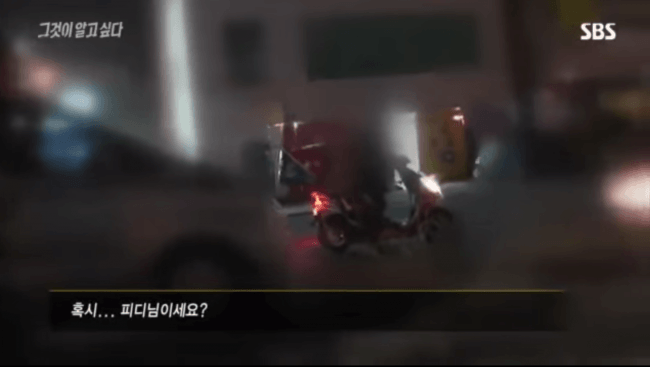 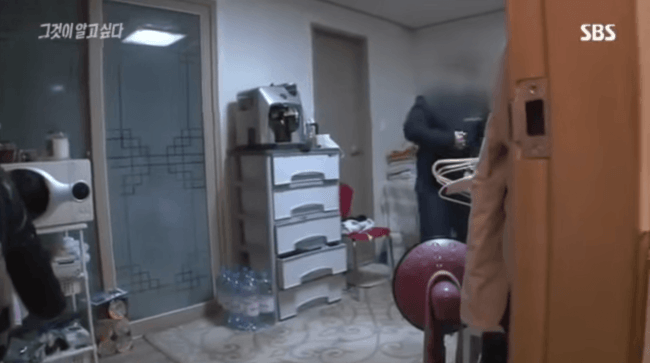 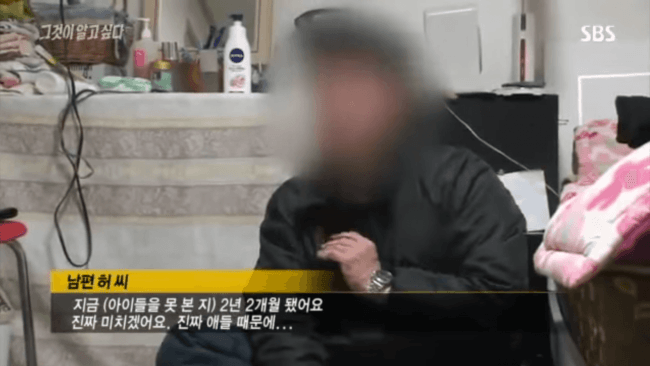 3. Lee Jung Hee claimed that her ex-husband (Mr. Huh) is a rich and powerful pastor who works with the government and media. But her ex-husband was found delivering pizzas in Busan living by himself in a small apartment. He informed the producers that he left the church after having a dispute with his father eight years ago.

Mr. Huh said that he still misses and loves his wife and children. He cried on camera as he confessed that he hasn’t seen them for over two years and two months. 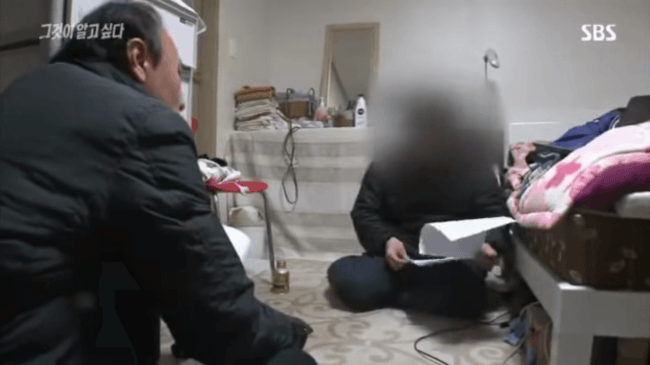 He was also not aware of the severity of the situation that he was currently in. 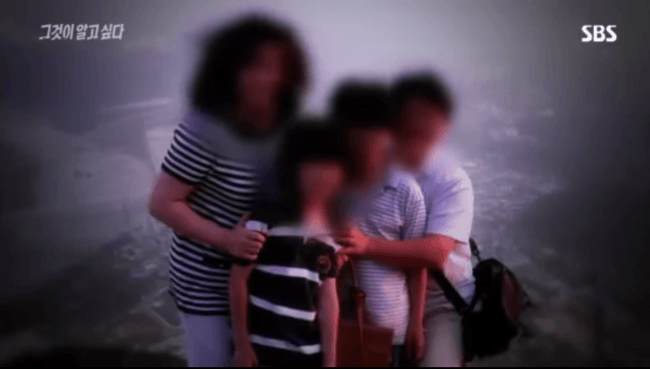 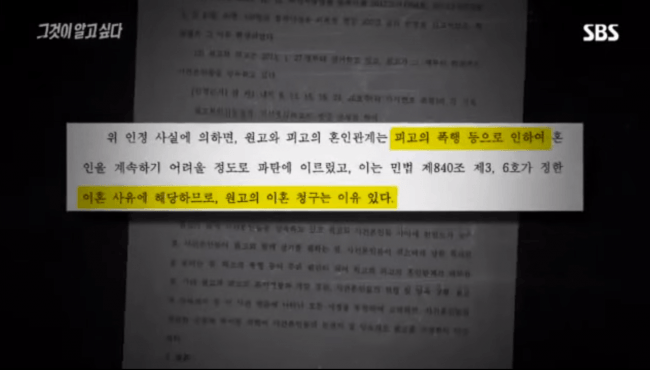 4. Mr. Huh admits that there were problems in the family that led to a divorce. He admits on habitual assault (not sexual) on his wife and older son. In the divorce paper, the court ruled in favor of Lee Jung Hee due to battery charges but nothing about sexual assault is mentioned.

During the court case that went on for a year and a half, Lee Jung Hee nor her two sons mentioned anything about rape, drugs or prostitution.

The father claims that after he requested for visitation rights of his two sons, Lee Jung Hee started accusing him of rape, drugs and prostitution. 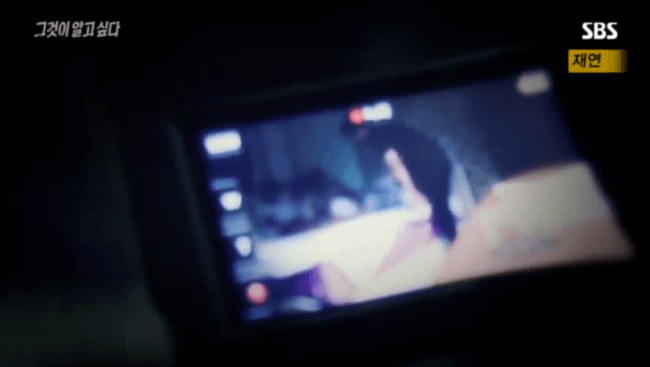 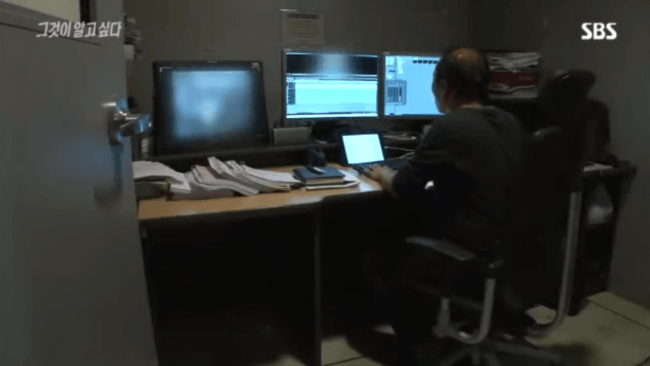 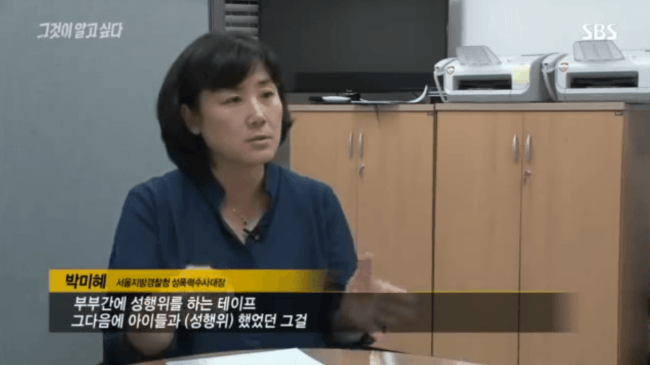 5. Shortly after Lee Jung Hee and her two sons accused Mr. Huh of taking videos of the abuse and posting them on the internet, the police did a surprise raid on his apartment and other properties. However, they could not find anything related to any of the allegations on his two desktop computers, house, car and other properties, only finding videos of the family enjoying vacations and holidays during the years that Lee Jung Hee claims these allegations took place.

The children were seen laughing and enjoying a boat while Lee Jung Hee was telling Mr. Huh to come and eat watermelon.

They also tested his blood for any drug usage but results came out negative. 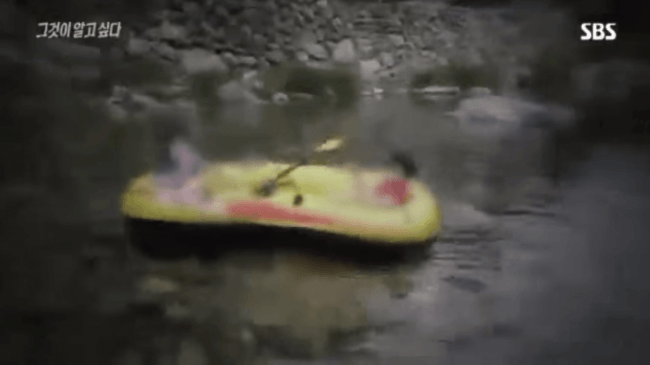 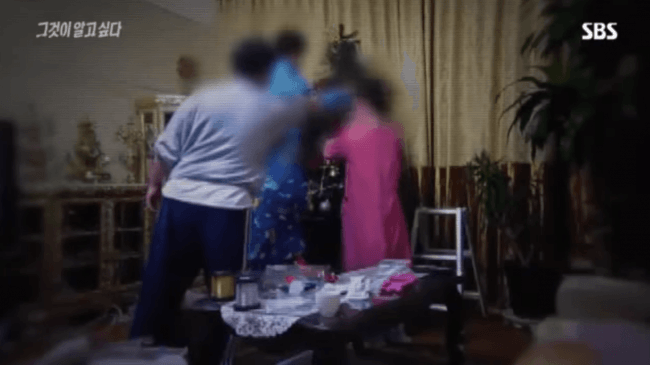 Since the raid was not successful, the police requested a further investigation through a meeting with Lee Jung Hee and her two sons. But the request was denied by Lee Jung Hee, claiming that they could not trust the police department anymore. 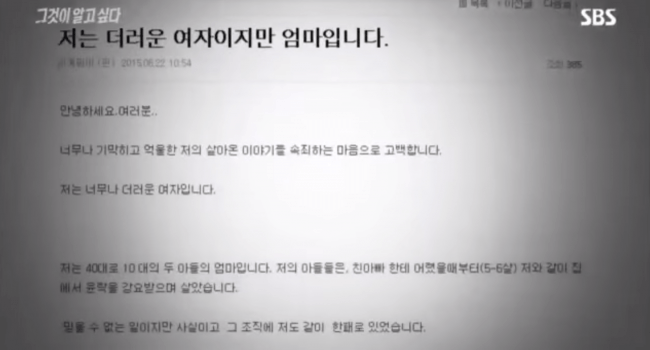 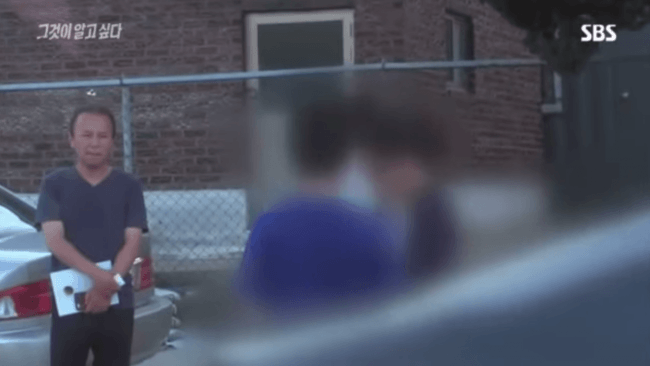 7. On the program, Lee Jung Hee walks into a neighborhood with the producers of We Want To Know The Truth. She called the neighborhood a “sex countryside.” There she claims that everyone in the neighborhood except crippling grandpas were involved in the alleged rape and sex parties.

Then, she walks up to a man and starts asking him if he knows her ex-husband Mr. Huh. After the guy said that he didn’t know who Mr. Huh was, she starts repeatedly stating that he raped her and her sons. The younger son, who was also present at the scene, starts following his mother’s allegations and accuses the man of raping him in the past. After the younger son starts accusing him of rape, the man calls the police. 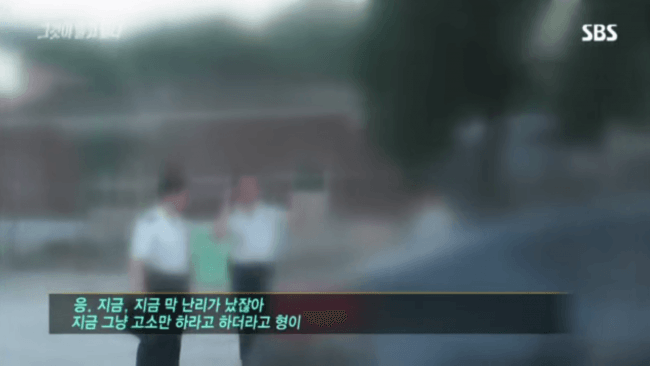 The producers found the actions of Lee Jung Hee and her son at the scene to be odd and interesting. After the police arrive, Lee Jung Hee gives her cell phone to her younger son and tells him to “call your brother and tell him everything is okay.”

However, the producers of We Want To Know The Truth confirmed that Lee Jung Hee’s older son was in the mental hospital at the time receiving treatment and impossible to reach. After five minutes, the younger son comes back and tells his mother that his “brother said ‘It is okay, the man isn’t a scary person so just sue him later and get out of there.'”

After seeing this odd action, the producers became interested in who Lee Jung Hee’s younger son actually talked to. A series of interviews revealed a companion that was close with Lee Jung Hee, a traditional Korean shaman, Kim, who is also her great aunt. 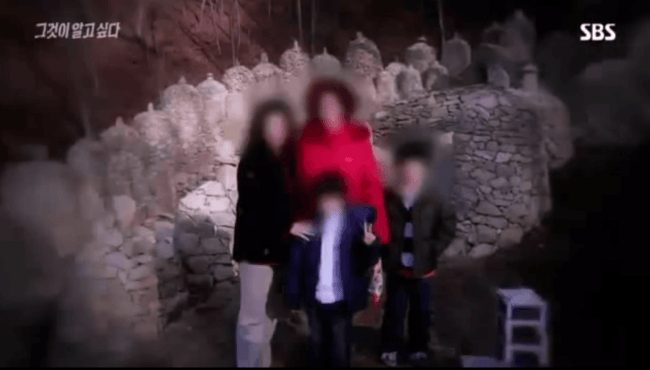 8. In a series of interviews with Mr. Huh and Lee Jung Hee’s sister, they claim that Lee Jung Hee has had a close relationship with a Korean traditional shaman for the last 10 years. Ever since she believed that she was healed by her rituals when she was sick, Lee Jung Hee has been calling shaman Kim her teacher. 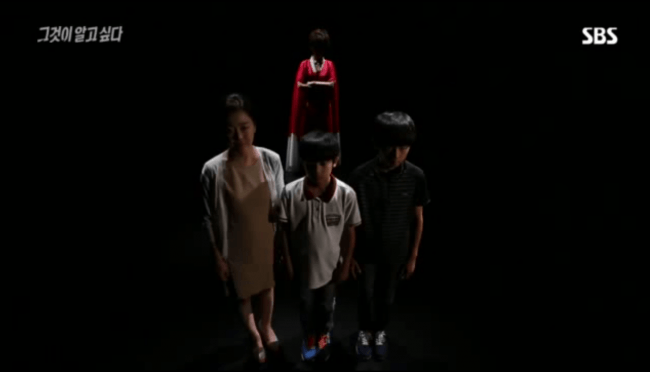 Mr. Huh confessed that he too believed shaman Kim for a while, during his pastor days. Shaman Kim told Lee Jung Hee and Mr. Huh that she believed in both Christianity and her traditional shaman ways.

As a family, they even donated tens of thousands of dollars as well as golden statues for the sake of their family. Mr. Huh stated that from 2006 when Lee Jung Hee started to become close with shaman Kim, the family started falling apart.

When the police mentioned Shaman Kim, Lee Jung Hee stated that she has nothing to do with this case and said that she already has been affected greatly. She starts to say that she knew people are going to blame her because she is a shaman but she does not know anything about this.

Mr. Huh claimed that since Lee Jung Hee was given half of the money from the divorce, she must have some money in her bank. He claimed that if she does not have any money, shaman Kim probably have used her trickery and Lee Jung Hee’s faith to take all of her money. 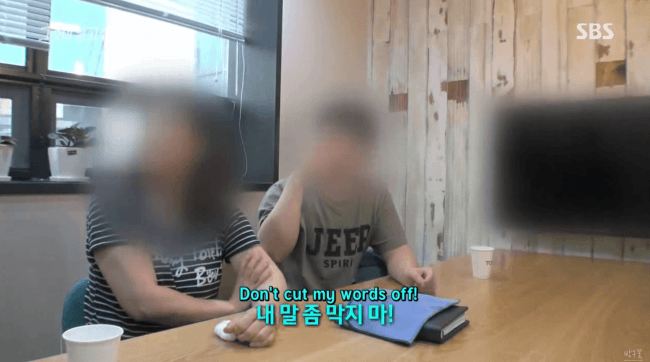 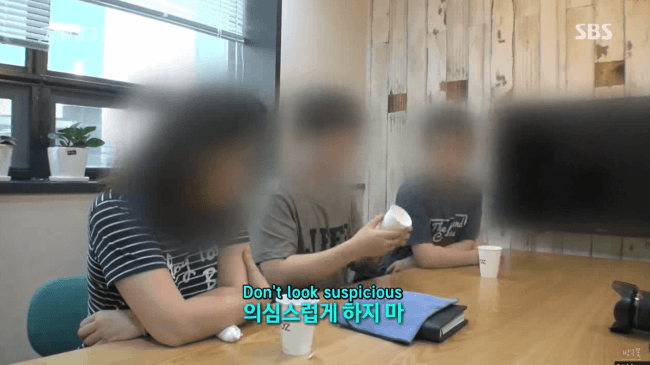 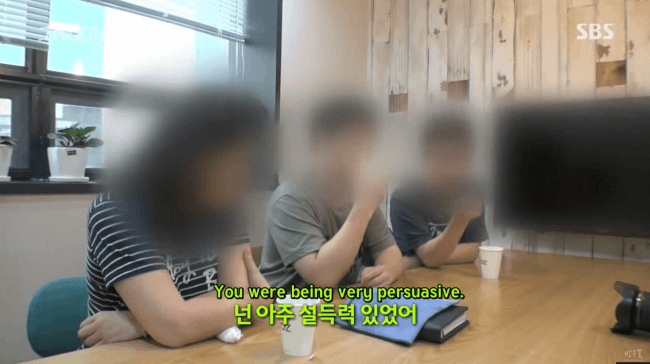 They also worried whether the producers believed their statements. When they realize that the microphone is still on, they become extremely nervous, worrying about what they said. 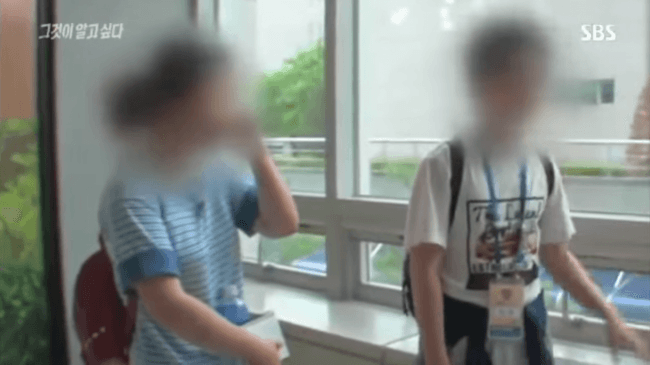 10. When her younger son was giving an interview about the countless sexual assaults he endured over the years, Lee Jung Hee was seen smirking and laughing in the back. 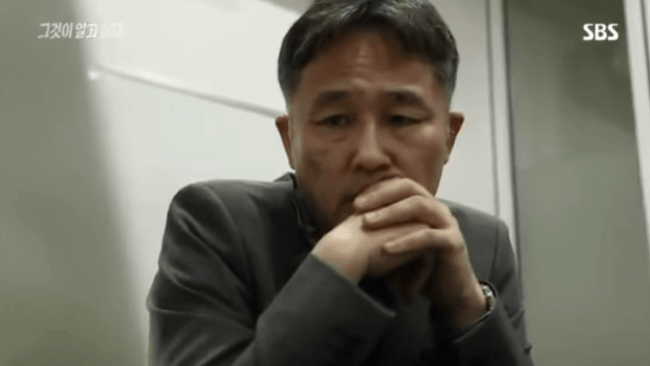 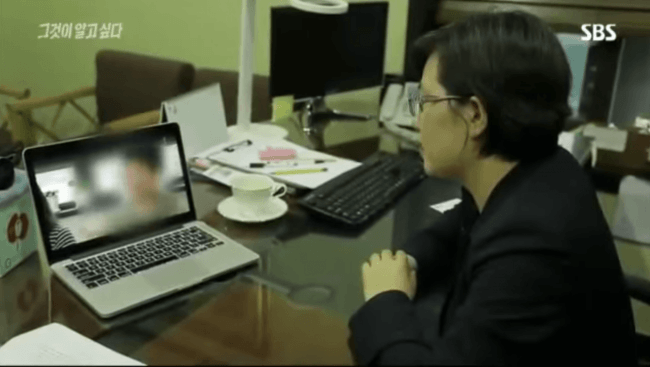 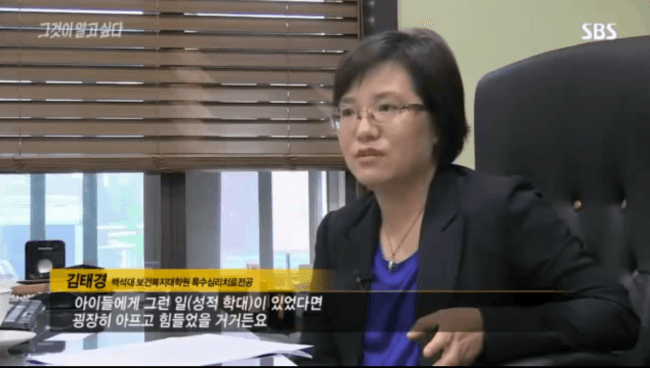 11. Interviews and videos were shown to professional psychologists from various universities (without the blur on their face nor voice distorted). When shown, the professionals explained that the children don’t represent the common victim in the manner that they speak of their past incidents. One professional claimed that although the sons are speaking of sexual intercourse and what they have seen in R-rated videos, they do not seem to have any of the damage, fear or pain from those alleged incidents. 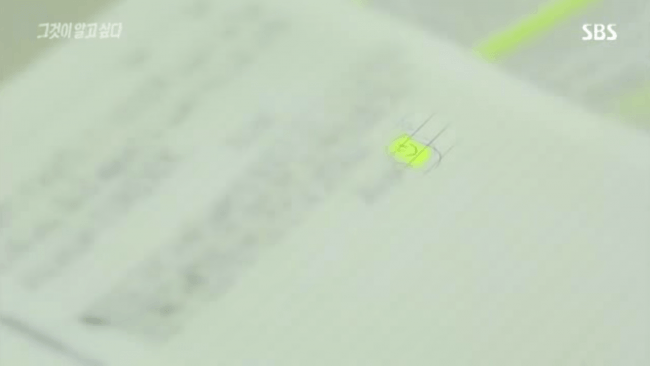 Also, every psychologist agreed that Lee Jung Hee and her two sons seemed like they were telling the truth when talking about the father’s brutal assault and battery. Mr. Huh agreed to this part as well agreeing that his repeated assault was the reason for the divorce. However, professionals agreed that when Lee Jung Hee and her two sons spoke of rape and drug usage, they could not explain in detail nor did they seem like they were telling an event that actually happened.