Releasing his single Oasis on July 9th, his track was spotted jumping into first place and as of the 10th at 3:30am KST, was #1 on real-time charts on MelOn, Mnet, Bugs, Olleh, Soribada, Genie, Naver Music, and monkey3.

Featuring Block B‘s Zico as the rapper and Crush as the vocalist, they create a beautiful and refreshing harmony.

Through his agency, Crush stated, “Ranking 1st was completely unexpected. I’m so thankful that my eyes are tearing. I want to thank everyone who has supported the track.”

Check out the music video below: 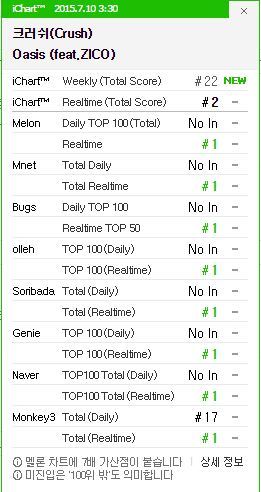