Jang Gwangja told Dispatch, “I was surprised when I saw the news on TV. My daughter (Lee Tae Im) isn’t that kind of a person – I don’t think she’s capable of saying such things.”

The old diver had previously gotten very close with Lee Tae Im through an episode of Tutoring Across Generations, even calling Lee Tae Im “my daughter,” and she seemed like she couldn’t believe what allegedly happened on February 24th.

Although she didn’t know exactly what happened between Lee Tae Im and Yewon because she was still submerged in the water at the time, Jang Gwangja had met with both women before the incident took place.

She said, “Lee Tae Im was always working hard whenever she came to shoot and all the divers called her ‘daughter’ because she was so kind and socialized with the people of the town very well.”

When asked if she thought Yewon may have instigated the incident, the diver shook her head. She stated, “Yewon was a very nice girl too. I felt as if she was also my daughter. I even gave her blankets and pillows because I felt close to her. She grew up in Seoul, so she probably wasn’t used to such harsh conditions, but she never complained once.”

Dispatch then went on to look over the events of February 24th in order to find out exactly what happened. Through the following conversation, it appears that Lee Tae Im was not in a normal state of mind at the time.

February 24, 2015
**(Lee Tae Im arrives late from Seoul)**
[Lee]: Mom I’m here~
[Jang]: Aigoo my daughter, why are you so late
[Lee]: (Embracing her) Mom~
[Lee]: Mom, I’ve been a celebrity for 10 years, but I’ve never once succeeded. This drama I’m in right now doesn’t look like it’s going to succeed either.
[Jang]: (Giving her some octopus) In Jeju we give students who are taking exams octopus and we believe it helps them. Have one so you’ll have good luck this year
[Lee]: (Hugging her) Mom..

Jang Gwangja said, “My daughter (Lee Tae Im) hugged me as soon as she saw me and she looked like she was about to cry. She didn’t sound well either…she seemed really depressed and I thought something must have happened.”

The two talked privately in the kitchen and Jang Gwangja recalled, “Her eyes were filled with tears when she was saying how she had no success her 10 years and she cried, saying this drama might not do well either.”

One media source reported that Lee Tae Im was rude during the meal saying, “It’s bad it’s too fishy,” but Jang Gwangja said otherwise, noting that the atmosphere was not rude at all. 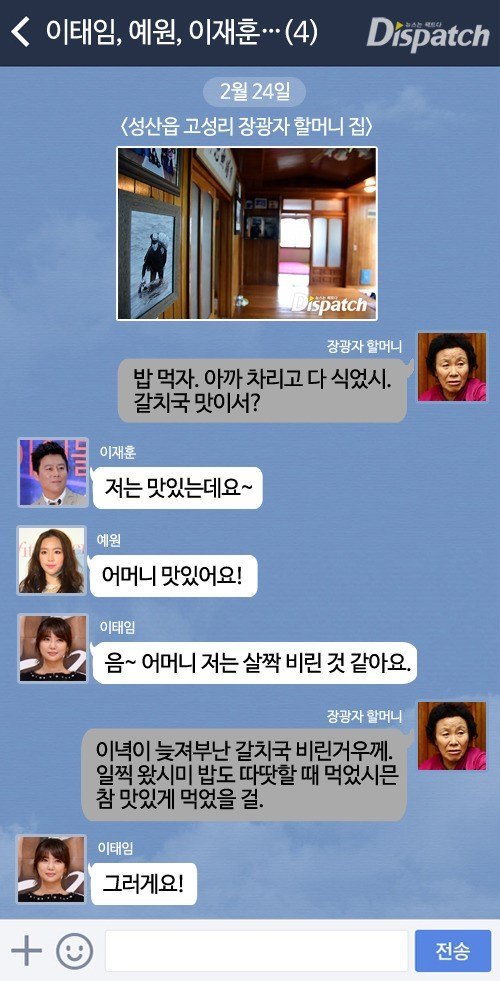 Jang Gwangja said, “Of course the soup was fishy. For her it was cold and she only said, ‘It’s a little fishy’ when I asked and I told her ‘That’s because you were late’ and that was all. It wasn’t an argumentative atmosphere at all.” 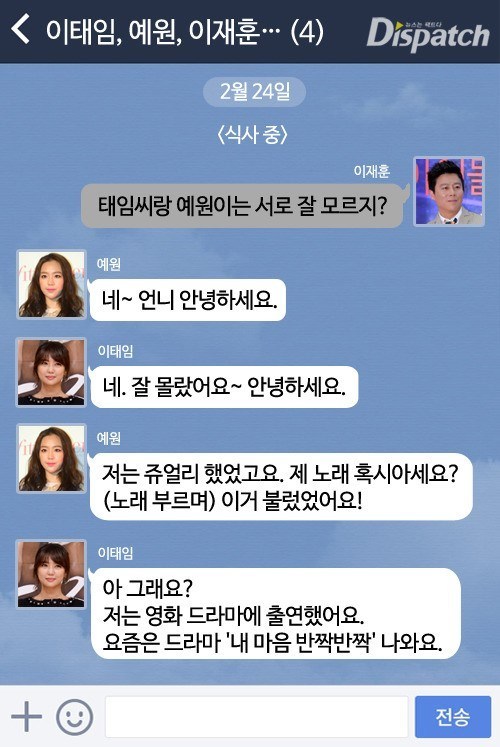 <During the meal>
[Lee Jae Hoon]: Tae Im and Yewon, you don’t know each other, right?
[Yewon]: No~Hello unnie.
[Lee Tae Im]: No. We don’t~hello.
[Yewon]: I was in Jewelry. Do you know any of our songs? (Singing) I sang this!
[Lee Tae Im]: Oh really? I was in movies and dramas. I’m in My Heart Twinkle Twinkle these days.

[Lee Tae Im]: (Singing and looking happy)
[Staff]: Tae Im get ready~
[Yewon]: Unnie where are you from?
[Luenkini]: I’m from Vietnam
[Yewon]: Wow~What’s that in your hand?
[Luenkini]: It’s a sea urchin I just caught
[Yewon]: Oh..cool~ Can I touch it?

According to Jang Gwangja, Tae Im looked happy, stating, “She was singing and looked happy. She was talking to the staff a lot..No one could imagine any problems would happen.”

The shooting went smoothly as well. Lee Tae Im, Lee Jae Hoon and Jang Gwangja were in the water and Yewon and Luenkini were standing by on shore.

Then, Lee Tae Im came out of the water before Lee Jae Hoon and Jang Gwangja.

It was after Yewon asked Tae Im, “Aren’t you cold” that a minute of silence ensued before Tae Im suddenly broke out cursing. Tae Im’s rampage continued on for two to three minutes as Yewon stood there confused, with tears welling up.

However, it remains unclear whether or not Tae Im made sexually offensive words during her cursing. Luenkini stated she couldn’t be sure because she’s from Vietnam, and therefore isn’t familiar with Korean slang. However, the diver did claim that the incident was not provoked by Yewon, stating, “I honestly didn’t understand everything. She talked too fast and I’m not familiar with swear words. However I don’t think there were any sexually offensive words like some reports claim. Everything happened so suddenly.”

After everything calmed down, Lee Tae Im stopped shooting and left. Yewon quietly went into the washroom they were using as a changing room and cried for around 30 minutes.

[Jang]: Did something happen? Where is daughter (Tae Im)?
[Diver 3]: I don’t know? Apparently she was cursing.
[Jang]: That’s crazy talk. She’s so kind she doesn’t even act like a snobby celebrity.
[Yewon]: (Her eyes swollen) Unnie you were surprised right?
[Luenkini]: No~are you okay..?
[Yewon]: Of course~!

Jang Gwangja stated, “When I came out of the water Yewon wasn’t crying. She smiled and said the shooting finished well and said, ‘I’ll come back sometime’.”

Luenkini stated, “Yewon apologized to me and asked if I was okay. She even took a picture with me before she left. I felt bad because I knew how long she cried for..” 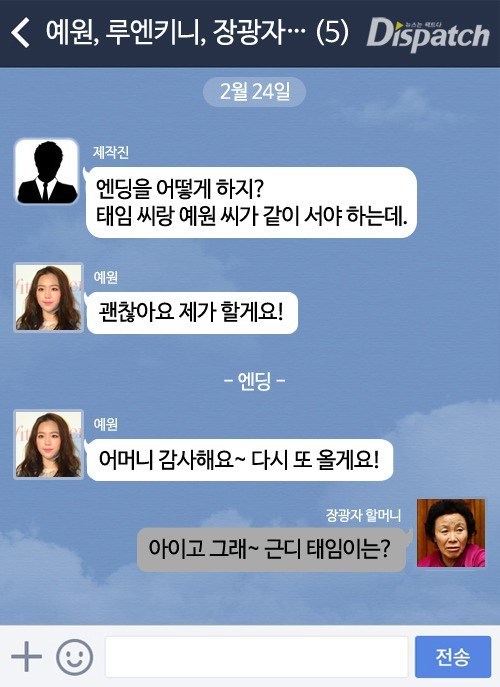 [Staff]: What do we do about the ending? Tae Im and Yewon have to be together.
[Yewon]: It’s okay I’ll do it!
[Yewon]: Thank you grandma~I’ll come again!
[Jang]: Yes yes of course~but where’s Tae Im?

A staff at the scene said, “No one would have said anything if Yewon just got up and left. She suffered through so much harsh words… but she insisted that she would stay to film the ending.”

In conclusion, Lee Tae Im did not seem her normal self that day. All the stress about her career, sadness about her failures, and depression may have been adding to her pressure. The actress was also sick with the flu at the time, so maybe all of it became too much for her.

However, the fact that she blew up at Yewon seems to be true beyond doubt.

ATEEZ’s Hongjoong Calls His Mom, But She Was Eager To Talk To Another Member