Eric Nam was in tears at EXO‘s music!

On the December 12 episode of Eric Nam’s K-Pop Daebak Show presented by DIVE Studios, Eric Nam talked a bit about himself, and gave background details on his songwriting process, music he’s listening to these days, and more!

While talking about his current favorite jams, Eric Nam fine tuned into the holiday spirit, and recommended EXO’s 2013 hit “Miracles In December” as a song that absolutely must adorn your Christmas playlist! He first talked about how 2/3rd of the song is Baekhyun and D.O., but opines that when Chen‘s voice is thrown into the mix, it makes for a nice balancing of vocals.

Eric Nam then began to play the song, and as soon as those piano chords hit, he began crying over how beautiful and soul-hitting it was!

As emotional as he got over the music, he still stopped to immediately sing along (perfectly) to the opening lines of the song, and then promptly resumed his weeping.

Fans have been dying at Eric Nam’s reaction to “Miracles in December” because while it’s heartfelt, it’s also so hilarious!

For a moment I'm confused what emotions should I react? Crying becoz of the song? or laughing becoz of Eric's face? 😂

ahshsjshsh sobbing in a corner-

Eric is the cutest 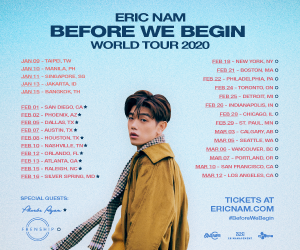 Facebook
Twitter
TWICE's Dahyun And Chaeyoung Look Back Fondly On Their Long Friendship And Trainee Days Together
. . .

2 hours ago
BLACKPINK’s Jennie Is The Queen Of Duality, Here Are 7 Fierce Versus Cute Moments To Prove It

3 hours ago
The Mystery Of Actor Jung Woo Sung Appearing At A Party, Mixing Up A Soju Bomb And Leaving Like Nothing Happened

No one knows that happened.

They’re all so different!

We’d do the same.