Just hours after releasing their comeback title track “Bad” and its respective music video and album, INFINITE has achieved an all-kill!

The group’s track “Moonlight” was also seen reaching the top standings on online charts, as well as several of their other tracks including “Standing Face To Face” in #4, “Footsteps” in #5, and “Love Letter” in #6.

INFINITE returns with a new and improved sound with “Bad,” which combines the sounds of hip-hop, EDM, and symphony to create a sublime track.

They will hold their showcase Reality on July 13th at the Seoul Olympic Hall. 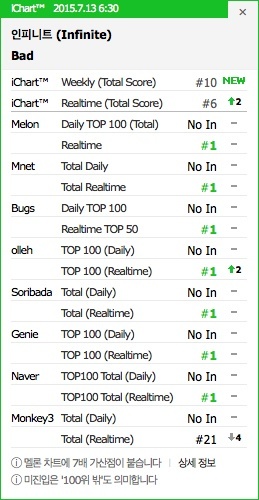