A Korean model has come under scrutiny after she made several tweets regarding IU‘s (22) recently revealed relationship with singer-songwriter Chang Ki Ha (33) when she seemingly criticized the female singer for her choice in men.

Soon after Dispatch broke the news of the two musician’s relationship, model Jung Doo Ri posted on her Twitter on October 8th, “IU, stop acting like this. Are you crazy.”

“Come to your senses and date kids like EXO. I’m asking you…” she continued. This particular tweet has since been deleted.

“You’re a woman with a top-rated face in Korean society, so why? First Sulli, now you… Did your powerful uncle fans put a corset on you. You’ve been caught, you’re out.”

After many criticized her tweets, she posted clarification to her statement, writing, “I love beautiful girls like IU. I can’t help it. Because of that my emotions tend to come out by my mouth a lot but in order to become that kind of beautiful girl (ㅆㅅㅌㅊ),  I wish you would date pretty and young guys like you. Of course, arguing about someone else’s relationship is funny but isn’t Twitter originally space for private conversations? Ah to the EXO fandom, I’m sorry. I don’t know Uaena’s (IU fandom) that well but when I looked at pictures, since they appeared to be such good looking, young, and fresh men, I went ahead and ended up using my mouth to express [such] emotions. I hadn’t known that would be a disturbance among the fandoms.”

“Anyway, wanting to see a beautiful girl X beautiful boy celebrity couple was my honest feelings. Before going around, pointing out who I antagonised or did whatever.  Ah, and everyone knows that the use of the word ㅆㅅㅌㅊ is a mirroring right? ^^ To be honest, I also think of IU as a great and beautiful musician of Korea.”

Jung Doo Ri is a model for MAXIM, a men’s magazine. 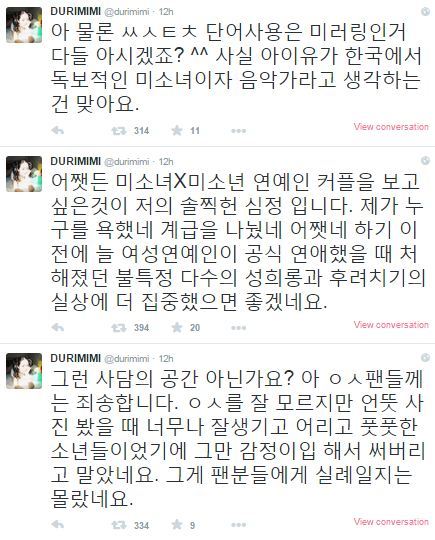