On the latest episode of her reality show Off the Rec.SUZY, miss A‘s Suzy revealed the immense difference between her notes before and after her debut, showing how she has matured and developed as an artist.

On episode 9 of the show, fans were presented with notes from Suzy’s pre-debut era in a room she had not yet revealed to her viewers. In this room, she stored all the notes and scripts she’s worked on over the years as an artist and actor.

Looking through different scripts, Suzy smiled and reminisced on all the pieces she worked on until she found two particular notebooks that prompted a very excited reaction.

The first book contained notes from her trainee period, where she found comments on English songs she practiced with, advising her to “lessen vibration”, “accentuate”, or to sing along to a specific melody. She explained that these notes were bringing up memories of her being scolded a lot while practicing these songs. 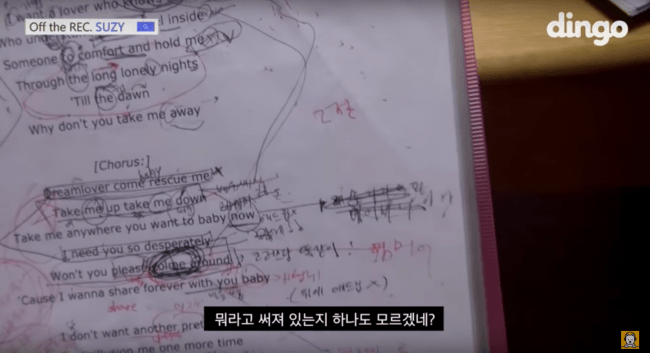 As Suzy turned the pages, she noticed that her notes became progressively messy to the point where she could no longer recognize what she had written at all.

Behind one particular sheet, she also found an old autograph she received from 2PM‘s Nickhun while she was a trainee, and explained she must have received it in a hurry since it was on the back of her notes. 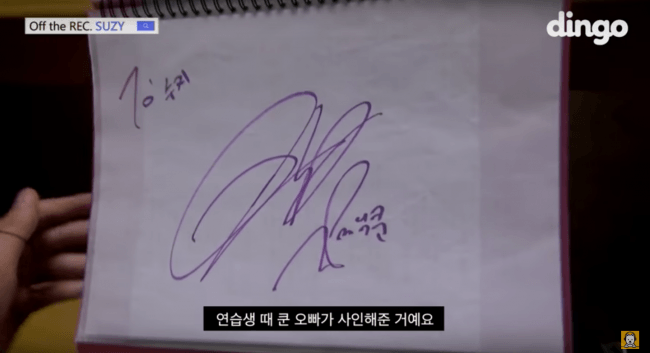 The next book she showed viewers contained notes from after miss A’s debut, and proved to be a lot more organized and focused on other aspects. These notes had messages and words of encouragement for herself to read, as well as feedback for performances on “Goodbye Baby” and various other songs.

Some examples of feedback she wrote down were “Don’t make it so obvious that you’re tired, think of others who are also tired“, “think of the fans“, “raise your shoulders“, “work on your expressions“, “don’t blink too much“; however, the one note that made Suzy burst out into laughter was the following: 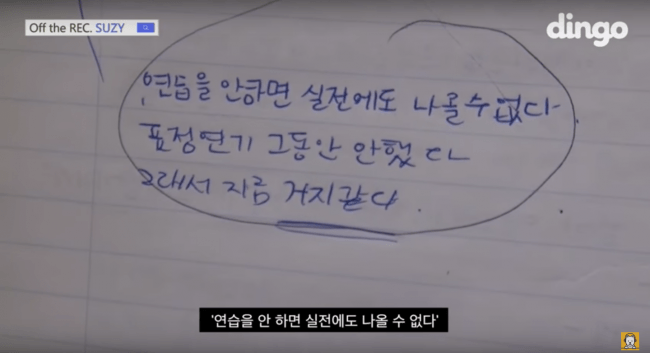 “My lack of practice will show on the real stage.
I haven’t been practicing my facial expressions recently.
So now they look sh*tty.”

Suzy laughs hysterically at her own notes.

Other notes thereafter included, “enjoy being exhausted“, “don’t spend too much money“, “reduce how much ice tea you drink“, “practice whenever you have the time (practice until you have to go to the hospital)“.

The notes certainly took Suzy down memory lane and caused much laughter.