After actress Seo Yuri left a remark regarding WINNER member Song Mino‘s supposedly vulgar and sexist rap lyrics, she has been receiving continuous hate from alleged fans of the boy group.

Actress Seo Yuri has formally asked the alleged fans of WINNER’s Mino to stop sending messages and comments of hate.

After Mino was criticized by the public for his lines in Show Me The Money 4, Seo Yuri posted on her SNS condemning his lyrics. Since then, Mino has officially apologized regarding his lyrics on SMTM4. Alleged fans of WINNER and Mino have been flooding her account with hateful messages and comments. After two days of receiving hateful messages, Seo Yuri have officially asked these messages to stop by posting on her Facebook account.

Here are couple of the hateful remarks she has received since: 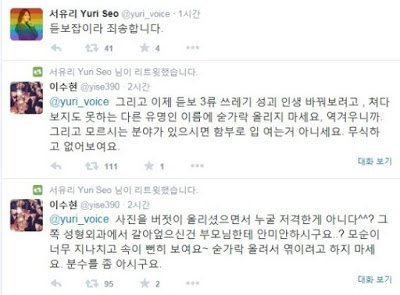 ALLEGED FAN: “Just because you urge to change your plastic surgery-faced trash life, stop trying to mess with a famous celebrity you can’t even look at. It’s disgusting. And you shouldn’t open your mouth in areas you don’t even know well. You seem dumb and lack intelligence.”

ALLEGED FAN: “And if you didn’t post a picture or anything, you’re saying you didn’t target anyone^^? You don’t feel sorry to your parents that you literally changed your face with plastic surgery..? You’re full of contradiction and so full of it~ Stop trying to mess with someone for your benefit.. Know your place.” 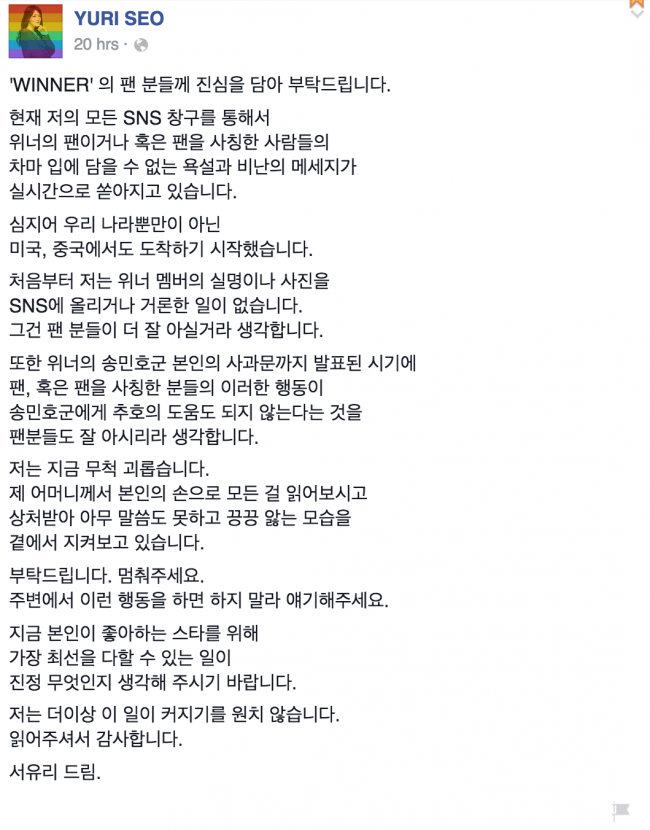 “I sincerely apologize to all of the WINNER fans.

Currently, all of my SNS accounts are full of hateful and vulgar messages at this time either from real fans or people claiming to be fans. It is not only from people in South Korea but even people from the U.S, and China have started to send messages.

At first, I didn’t even put a WINNER member’s name nor picture on SNS. And I know all of the fans know that better than anyone. In addition, when WINNER Mino himself has officially apologized at this time, I don’t think the actions of all the fans and people claiming to be fans will help Mino’s situation.

I am currently in deep pain. I am also witnessing my mother who is keeping silence in deep pain and sorrow after reading those hateful comments and messages with her own hands.

I beg you please. Stop this. If anyone around you is doing such action, please ask them to stop.

Please ask yourself what is the best for the celebrity you sincerely love and what the best action for yourself to take. I don’t want this thing to blow up more than it already is.

Thank you for reading this.
Sincerely, Seo Yuri”

[ +5683 / -148 ] It seems as though Seo Yuri is reacting to this situation calmly and well. But don’t forgive those dog netizens who are claiming to be netizens who attack people on a personal level.

[ +4594 / -168 ] What is the reason and Seo Yuri is receiving such hate dumb fans especially with something Song Mino clear is at fault.