Taeyeon has spoken out for the first time since her controversy at MAMA 2016 broke out, for not performing with Wiz Khalifa.

Leaked rehearsal videos showed that Taeyeon was set to perform with Wiz Khalifa at MAMA 2016. However, when the actual performance came on, Wiz took the stage by himself.

DJBonics leaked even more clips and videos of the rehearsal after Wiz tweeted about his disappointment. Now, Taeyeon has finally spoken out about the issue by uploading a long message to her Instagram Story.

I see a lot of people being very curious about the performance yesterday so I’ll explain (I would be curious too). I was getting ready for the rehearsal and saying hi to Wiz Khalifa. I was stoked for the performance and getting ready. Then I heard that there was a problem with the music. Due to this reason I was unable to even go through mic checks with him properly and unable to join him on stage.

For a live performance you need an MR version of the song but they only had the AR ready. I was a bit taken aback since I was supposed to do a live performance, but I wanted to be on stage with him because the important thing was that we had a chance to collaborate…and honestly a chance like this doesn’t come often ^^. So I thought maybe if I sang louder than the AR vocal than I would be able to mask it ㅋㅋㅋ.  The producers wanted to do their best and make the best performance possible. So we decided to go ahead with the AR. But then a few hours before the show I heard the news that my part had been cancelled. I guess performing overseas makes a lot of things unpredictable. Even during rehearsals the day before I heard that there was something wrong with the sound system, so I ended up returning to the hotel after waiting without even rehearsing.

I guess a lot of problems coincided. I was so saddened and disappointed that I had to return without being able to perform such a stage.  I hope no misunderstandings happen because of this issue. I know there were people excited to see the performance after hearing about it. I promise you that I will return with a better stage next time. I am so grateful for everyone that supported me until the end yesterday. 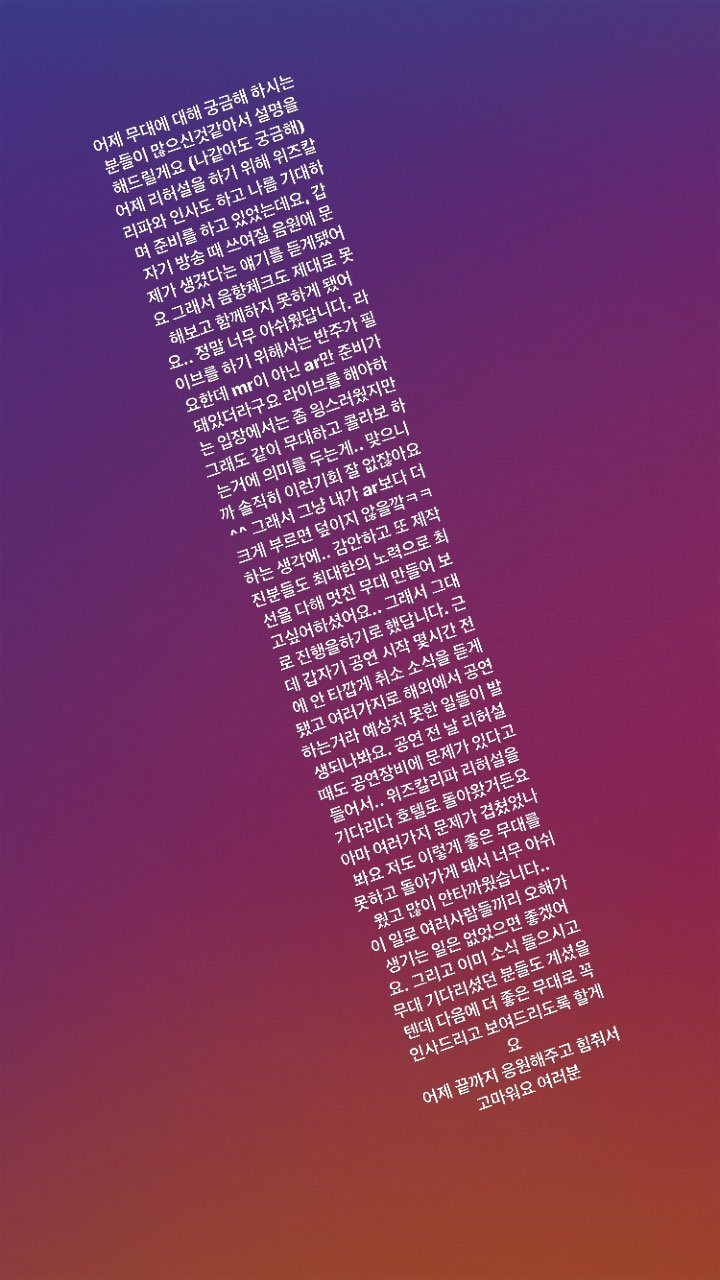