Fans share a heartfelt letter written by Tzuyu amidst her political controversy.

Ever since the political controversy involving maknae member Tzuyu of TWICE, both JYP Entertainment and Tzuyu have publicly apologized for their mistakes. Although many fans and netizens are criticizing for the way JYP dealt with this situation, many fans are cheering Tzuyu as she gets through this hard time.

She made her first appearance since the controversy by attending the Idol Athletic Championship on Tuesday, January 19th.

A fan has recently posted a photo of the letter written by Tzuyu to her fans that came to cheer her on. 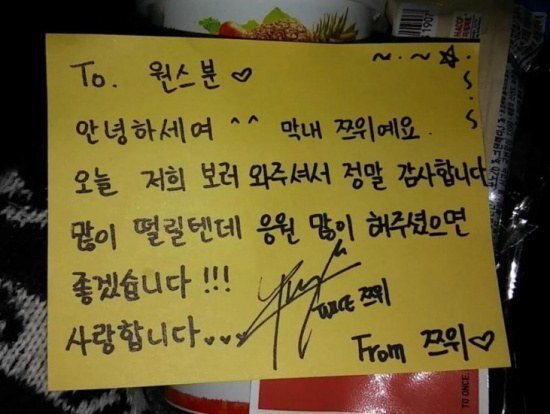 Hello ^^ This is maknae Tzuyu. Thank you for coming and cheering for us. I know you guys are nervous too but I hope you guys keep cheering us on!!!!