Like a scene from any major film, the police arrived to the rescue of a bride and a groom stuck in traffic while on their way to their actual wedding ceremony.

The groom was stuck in traffic as they tried to make their way to the ceremony scheduled for 11 o’clock that morning. The bride who was dressed in her wedding garb was described to worried and tearful for fear that she won’t make it to her own wedding. 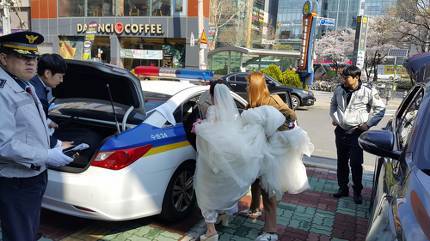 The police, however, instantly decided to drive the couple and their family in their patrol cars so they could all make it to the ceremony. It was reported that they all made it to the venue in less than ten minutes.

A job well done for the Daegu Police!